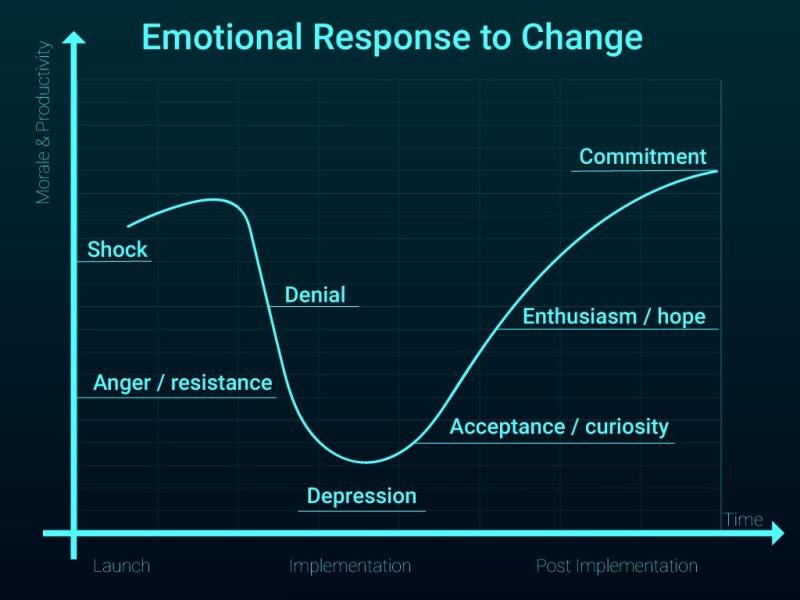 A friend of mine shared a curve of how people react to change over time yesterday. I had seen variations of the stages of changes before but it does an excellent job of outlining the concept. The question is: where am I currently on this trajectory?

I am a very optimistic person generally speaking. I tend to look on the bright side of life as I have been very lucky up to this point. There is no reason why this coronavirus pandemic should change that. I have also been so lucky in my life that I have never had to go through anything like this. Therefore I cannot know how I will come out at the other end. Will my optimism stand months or years of confinement where we all lose our jobs and must eat nothing but canned pasta while staring longingly out the windows at the empty world?

Having lived in 4 countries I consider myself to be quite adept at adaptation. And adapting means passing through these steps.

The build up to the confinement happened both very quickly and very slowly. When the first case was reported at a ski lodge in the Alps there were not immediate reports of major contagion. Sure, China was getting slammed, but France seemed a world away. There was isolation and tracing the case, and then it went away.

Until we didn’t. Cases started popping up again, in the east, in the Oise region, then someone died in a hospital in Paris. The Oise went into lockdown. People from the area were asked not to come to business meetings in Paris offices. The slow build meant that we could see confinement coming.

Macron made an announcement to stay inside as much as possible. But there wasn’t a decree. The next day was the first beautiful spring day, and we all knew what was coming. The parks were packed. I jogged through the Buttes Chaumont with the foreboding that I wouldn’t be seeing this life for a while.

Macron came back on TV to chastise us. Too many people at cafes and too many people in the parks. “This is serious.” No shit, man. We all knew it was serious and we all knew what was coming. Even prisoners on death row get a special meal before their execution.

So when the lockdown began it was not a shock. The announcement was for two weeks, or one cycle of transmission. If they had announced two months there would have been a shock. Release the news slowly so as not to rouse the population too much.

The second announcement for another two weeks felt dishonest. It was clearly going to be longer than that.

What is shocking now the rise of the pandemic in the United States. It’s as if the disease found a tinderbox and set it alight. New York City alone has almost as many cases as each of the hardest hit European countries. Detroit is being ravaged. As a Michigander this is particularly hard to swallow: the Motor City, victim of so many hardships over the past 50 years is now under siege from a mysterious bat disease from Central China. And after the blight, mismanagement, crack cocaine, and bankruptcy, the conditions are all too perfect for yet another round of mass suffering.

There was no denying that the confinement was going to be stressful and difficult, or that we could wish it away. Being contained to the home means no distractions, no group of buddies to drink with and laugh away reality, no places to escape to when we need a break. There was maybe denial that the confinement would achieve its goal, that everyone already has the disease and that limiting movement will do nothing to flatten the curve other than add frustration, economic waste, a whole steaming pile of helplessness into the mix.

Even that doesn’t seem to be true. You can disagree with the confinement but it is helping. There is no denying it.

Unlike denial, this is clearly a stage that I went through. The anger has been directed at different targets, on many levels irrational but the anger is still real. Anger at dog owners for fouling up the streets. Anger at the Chinese officials in Hubei who covered up the first cases instead of getting it under control. Anger that they let the doctor who discovered the disease die from it. Anger that America is no longer the great nation that will come and save the world but a sick animal who is curling up in a corner to die by itself. Anger that all of the things I wanted to do this year are in jeopardy. Anger that my son won’t just read a fucking book by himself for five whole minutes.

The anger is palpable. It still sits inside me and with all of our fuses cut short it rears its head at the slightest provocation. I don’t think that I’ve come out of the anger phase.

The same forces that make me depressed also keep me from tumbling too far down. The whining – the incessant, guttural, living-in-my-ears whining is driving me to madness, but the kids are also two fountains of energy who deserve care and a protected childhood. Anger is swiftly followed by forgiveness. Forgiveness often turns quickly into spurts of joy.

So depression is there, underlying everything like an old coat of paint that shows through when there are chips in the exterior but cannot be seen or felt most of the time. Will more cracks appear? How long can the tank of optimism hold up without a refuel of freedom?

The small good news is that I have started to come to terms with this mess and that since I got sick and recovered I have taken a new lease on the situation. Instead of looking at confinement as one long trudge, I have taken the approach of mastering the month of April.

I ripped down my old checklist and put up a new one. The goal being to check as many of those damn boxes as possible, making time for exercise and writing.

On Day 16 I went for my first run since falling ill. I used my 1 kilometer radius map and headed off for a 5K. I was worried about the fatigue or if I had trouble breathing.

The streets are dirty and dusty. The homeless people noticeable without the throng of humanity to hide them. One drunk was dressed as a clown, his sadness visible despite his costume. Police were checking people at every metro exit. But the glorious sunshine made it all feel wonderful.

28 minutes of running in the afternoon sunshine. I kept to the sides of the street that were basked in it. I felt the warmth and the energy returning to parts of my skin. When I got home I hit the ground for push ups and squats. I checked off those damn boxes on the first day of April.

If that means that I’m starting to accept all of this then I suppose it is good news. The French media was full of articles about the end of confinement and how that might play out. A coincidence to an improvement in my morale? Probably. Those are just speculation driven by the countrywide desire to get back to life as normal. Those articles probably drove a lot of clicks too, I know I clicked on them.

Looking ahead at the chart I see the next step is enthusiasm. I do not know how that could apply to this situation. I don’t think that I will adapt to being a hermit and never want to go outside and see my family and friends again.

But I’ll take acceptance over anger and depression.