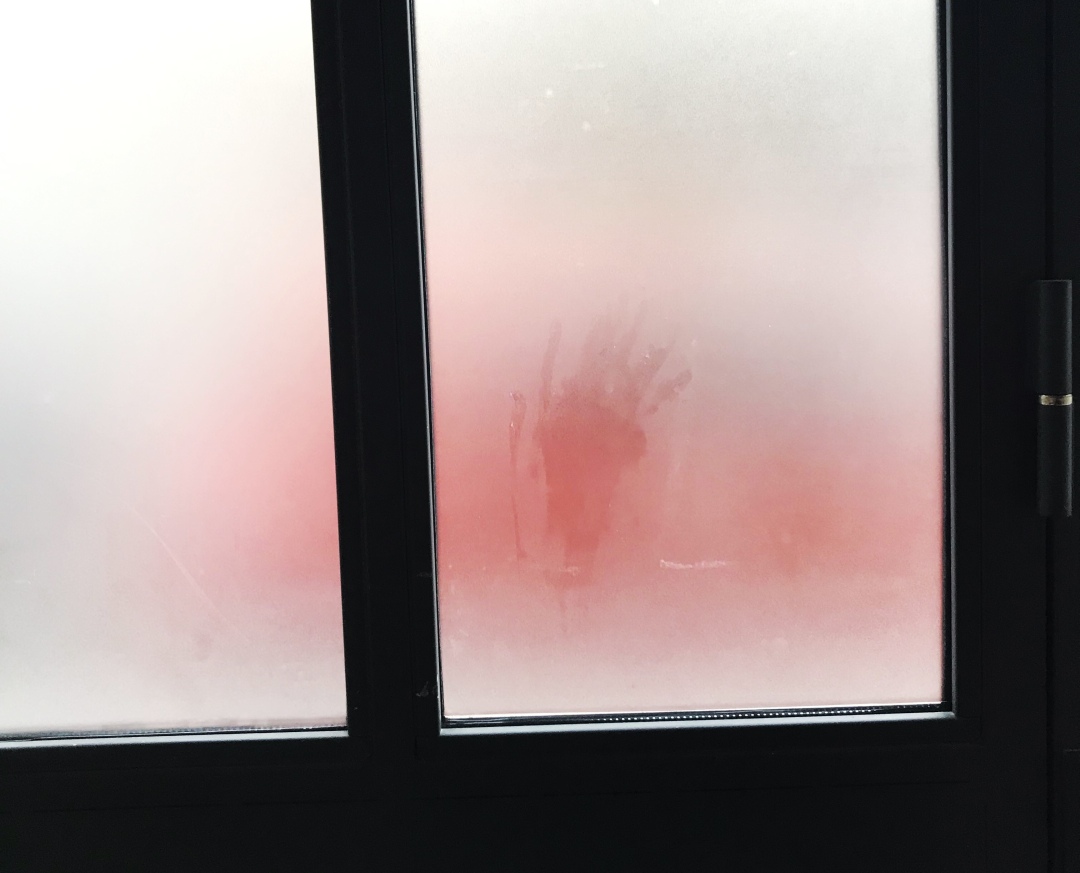 A hand print appeared on our door in the fog of the morning. A child zombie in the clutches of death reaching for a last chance to stay alive? Maybe I’m overreacting but everything looks like something out of an apocalypse film right now.

And the reality of the disease is setting in. One of my best friends is infected. I hadn’t seen him in person since we went to see Dave Chapelle at the end of February, we were supposed to do dinner with the wives last weekend but he wasn’t feeling well. Good thing I didn’t insist.

Italy’s numbers are staggering, almost a thousand deaths in a single day. We’re nearing wartime levels of carnage. With a greying population and a culture of spending time with everyone you know, Italy was primed for this type of disaster. They’ve been in containment for a week longer than France but the disease only accelerates. Is that because testing is becoming more and more comprehensive? Will the actual numbers of contagion tell a different story? How long until there is some sort of good news?

Day 5 was our first Saturday in containment. Our first weekend. Would it actually feel like a weekend? My wife and son went to the bakery to get pain au chocolats and a baguette, the weather has taken a turn for the worse, it almost feels like it’s going to snow. This will help to keep people inside. I personally felt no desire to go out.

I had ambitions for this weekend: exercise, administrative tasks, continuing to put all our things in boxes for the move that is still supposed to happen in early April. I am happy (and a bit proud) to say that we accomplished some of that ambitious agenda.

We did some body pump exercises with my wife, the crawlers alternating between our legs as we alternated between squats and push ups. I put my son on my feet and lifted him in the air – extra weight for my ab crunches. At the end of about 20 minutes it felt almost like we had done some real exercise. I am heavily missing the real body pump classes at my gym, the intensity and that mind-clearing focus necessary to make it through to the end. And most of all I miss that feeling of accomplishment of finishing each class. If I can find a way to replicate that at home, I will be one step closer to mastering this containment.

There are many things that I am coming to miss. The body pump courses but sports in general. Right now is supposed to be the start of the March Madness college basketball tournament. With all American sports cancelled until the foreseeable future, this leaves a big hole in my life. Living in Paris with the time change means that most sports are unwatchable; except for the tournaments whose noon and early afternoon games are on in the late afternoon and evening for me. Checking ESPN, a daily ritual for all of my adult life, has become meaningless (Tom Brady leaving the Patriots for the Buccaneers? Did he catch some sort of mentally-debilitating version of coronavirus?) and what was always a grand source of pleasure has dried up.

I’m also missing my bike ride to work, the look of the light of the rising sun on Marianne in the center of République Square and the feeling of fortune when the lights turn green right before I cross a busy intersection. That freedom of movement, to take any path that begs taking, to explore and get sidetracked. To be able to discover.

And, of course, Ramen. Since last September I have been on a quest to try all of the different Ramen places in Paris. There are some stellar places (Dosanko, Kodawari) that create succulent dishes of that soupy goodness that is my definition of comfort food. At least once a week I block off a lunch and go by myself (or with my corona-afflicted buddy) to try a new spot or go back to one of the best. I’ve hit about 15 different places so far. I made some Thai soup yesterday, but it only made me sad. The first thing I do when I get out of containment is get some fucking ramen.

Exercise checked off the list, we tackled administrative tasks, or I should say that my wife tackled administrative tasks. We have been in the process of buying our new home since we visited it last summer. We were supposed to move at the end of January but had to push it back because my wife changes jobs (for the better) but that meant waiting for her to validate her trial period. As soon as that happened, the coronavirus started to rear its ugly molecule of a head.

Somehow despite the restricted postal service, we received the formal mortgage offer at the end of last week. Now begins the period of checking documents, signing copies, and unblocking funds. How we get those signed documents back to the different people that need to receive them is yet to be unseen. I haven’t received my Economist this past week (much to my sadness – add another item to the list of things I miss). The post office nearby our place is closed but apparently others are remaining open. The big question of will we be able to move is starting to loom larger. We have to sign documents – normally in the presence of each other – to transfer keys. We can probably find a workaround for that. But if there are no movers to come and pack up our stuff, that’s going to be more of an issue. The current laws don’t prevent people from working, but if everyone becomes too frightened to go out, or people can’t find ways to take care of their kids, there won’t be people staffing the moving companies.

There is some relief in getting mundane administrative tasks done. Hooking up a printer and seeing that it works fairly well via its moble app. Being able to print off the attestations to be able to at least go for a run. Sending legal documents to my father-in-law so he can pour over the fine print (thanks Patrick!). Even going through our stuff while packing up some of the first boxes. Throwing out dusty copies of old plays that I wrote, while keeping a few for posterity.